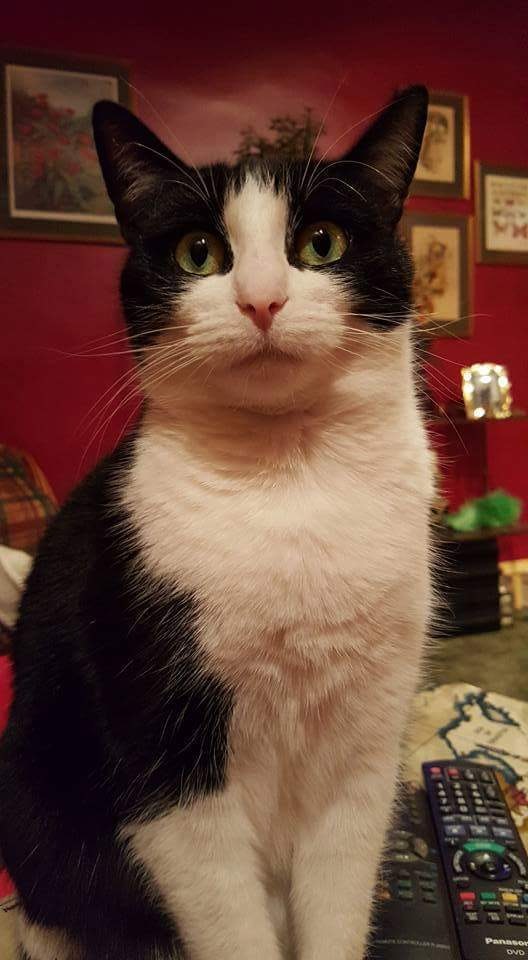 Dolly, previously Dolly Dimple, was Adopted in 2013. She came to join Jasper who had also been adopted from Mrs Murray's 15-16yrs earlier. Jasper seemed lonely having lost his "sister" 3yrs earlier, who died aged 21.

Dolly was a handfull: Headfirst down the toilet, climbing as high as she could, swinging off the light shades and generally running amock. I took her back to Mrs Murray's then went back to get her the next day in tears. Thankfully I got her again. Jasper was all out of sorts with this wee mad kitten, what I didn't know was how sick he was (Thyroid) and sadly he passed only 2months after Dolly arriving.

Crazy Dolly needed lots of games and play to entertain her and in January 2014 we added Seven to our family.

Within hours they were playing and cuddling each other. Seven was adopted on 7th January 2014. He or she was always going to be called Seven, my seventh cat ! A coincidence I got him on the 7th.

He and his litter were hand reared by Mrs Murrays from 3days old and he was the softest, sweetest and most gentle kitten and now cat, the only time he has ever growled was when stung by a wasp.

Dolly loves, her daily wipe with a facecloth in the wet bath and playing with water, always keep the toilet seat down ! She drinks with her paw dip-lick and plays fetch just like a dog, bringing her comb to me for a brush,, every day ! She is very vocal and feisty but loves a cuddle falling asleep in my arms.

Seven loves his food and treats which he wraps his paws round your hand to eat (from being hand fed a bottle), he gives amazing lovies and kisses, especially when food is available and playing with his laser light and catch the blow bubbles and the attention of visitors. He purrrrs me to sleep every night.

I love them and thank Mrs Murray's for all they do and allowing me to be their mum. Each year over 1500 animals pass through our doors - most abandoned or unwanted. The Home is a registered charity and is largely dependent on donations, legacies and the support of the public to help fund the cost of looking after the animals and securing their future.